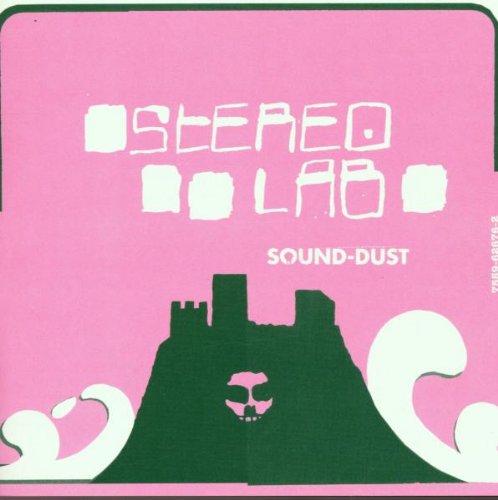 On their 12th release, art-pop act Stereolab float deeper into the post-rock atmosphere. They still draw from Ennio Morricone and Henry Mancini when creating their own fantasy soundtracks, but Sound-Dust lacks the dynamic interplay that invigorated Cobra and Phases Group Play Voltage in the Milky Night. The disc is all easy-listening lounge that's almost too gentle on the ears. There are no urgent sonic experiments, and only three tracks really spark to life: "Spacemoth," "Captain Easychord," and the Kubrick-inspired "Gus and the Mynah Bird." "Easychord" is the catchiest song on the album, containing the CD's most ebullient melody-emitting, warped, country-twanged notes. Beyond that, Stereolab fans should prepare for a very sedate, mature affair. --Jennifer Maerz

Ever since Mars Audiac Quintet and Emperor Tomato Ketchup, the rich production on Stereolab's recordings has belied the fact that, in live performance, the band unveils their identity as minimalists whose songs, stripped of strings, brass and vibraphones, are haiku-like in their economical usage of voice, percussion, organ and guitar. In the hands of Tim Gane, that last instrument becomes a tool used to reduce the myriad genres the group has touched (Krautrock, bossa nova, country) to their essential structures, which then become vehicles and instances of trance-inducing repetition.

"p"All this may seem remedial to anyone remotely familiar with the group, but it bears repeating in the face of the cool reaction Stereolab's latest long-player, Sound-Dust, may get. Listeners hoping for a radical departure from previous outings may be disappointed to find that the disc doesn't necessarily break new ground - lush arrangements, enchanting melodies and otherworldly tones abound, but that's to be expected from Stereolab. But to assess this apparent lack of progress as aesthetic stasis or another signal of the group's lapse into irrelevance would be to overlook the ways in which their prolific output (eight LPs and scores of singles and EPs in the span of 10 years) incessantly reworks the same themes and ideas, as if the band wanted their records to blend into a seemingly endless, repetitious whole. It's a subversive pop formula that questions assumptions about innovation, originality and aesthetic progress, and one that Sound-Dust recalculates in superb fashion.

Avail your complimentary Times Prime membership for 1 year worth ₹999

Does the Evergrande turmoil in China have implications for India?
Devina Mehra | Chairperson and Managing Director, First Global
ET STOCK INSIGHTS FOR THE DAY

The hows and whys

Is permanent WFH possible in India?

View: India needs a new pedagogy, not any Kota factory
View: Back home happy with Biden Bhai
View: Why it's time for India to give Modern Monetary Theory a chance

What Emma Raducanu can learn from Roger Bannister is to not be unidimensional
Kohli move to resign as T20 skipper after World Cup could affect India’s performance
Why India’s IPL and World T20 bound players cannot afford to test positive in England
Are we treating our international cricketers and sportspersons like gladiators?
Opinion »

Stories you don't want to missPOWERED BY MEDIAWIRE

Be part of Australia India Business Exchange 2021, join here
Why is there a rise of institutional investors in Crypto-ventures
How CRED pay is maximising the utility of CRED coins

U Gro Capital on hiring drive; plans to double workforce by end FY-22
India reports 29% surge in employment across nine sectors in June quarter: Labour ministry survey
Looking for a job? TCS is offering a free course to improve your employability skills. Here are details
Jobs/Careers »
BrowseCompanies:
ABCDEFGHIJKLMNOPQRSTUVWXYZ
123456789
BACK TO TOP