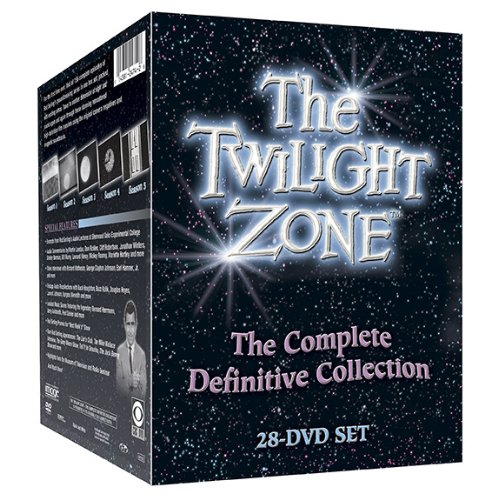 For the first time ever, find all 156 complete episodes of Rod Serling's groundbreaking series in one box set, packed with exciting extras! Travel to another dimension of sight and sound again and again through these stellar remastered high-definition film transfers. Extras include the fascinating Serling bio-documentary Submitted for Your Approval, compelling interviews with the show's writers, the series' unaired pilot, audio commentaries with Martin Landau, Leonard Nimoy, Cliff Robertson and much, much more!

Submitted for your approval: The Twilight Zone's inaugural season, all 36 episodes complete with Rod Serling's original promos for the following week's episode, not seen since their original broadcast. To discuss television's greatest anthology series whose title has become pop culture shorthand for the bizarre and supernatural is to immediately become like Albert Brooks and Dan Aykroyd in Twilight Zone: The Movie; a can-you-top-this recall of famous shocks and favorite twists. Several essential episodes hail from this season, among them, "Time Enough at Last" starring Burgess Meredith as a bespectacled bookworm who is the lone survivor of an atomic blast; "The After-Hours" starring Anne Francis as a department store shopper haunted by mannequins; and the profoundly disturbing "The Monsters Are Due on Maple Street," in which fear and prejudice turns neighbor against neighbor (and, by the by, whose alien observers inspired Kang and Kodos on The Simpsons).

From an unsettlingly persistent hitchhiker to a malevolent slot machine, The Twilight Zone's first season did plumb "the pit of man's fears." One forgets how moving the series could be. Three of this season's most memorable and enduring episodes are the poignant and primal "stop-the-world-I-want-to-get-off fantasies, "Walking Distance," "A Stop at Willougby" and "The Sixteen-Millimeter Shrine," in which desperate characters seek refuge in a simpler past. Serling's few stabs at comedy ("Mr. Bevis," "The Mighty Casey") have not aged well, but the series finale, "A World of His Own," starring Keenan Wynn as a playwright whose fictional characters come to life, has a brilliant capper. The episodes are more deliberately paced than one might remember. Less patient younger viewers might be anxious to get to the payoffs, but once they settle into the rhythm, they will savor the literate writing and the performances by such veteran actors as Ed Wynn, Everett Sloan, and Ida Lupino, and newcomers such as Jack Klugman. The extras, including the unaired version of the pilot episode, "Where is Everybody?", audio commentaries and recollections, and a Serling college lecture, truly take this six-disc set to another dimension. --Donald Liebenson

The middle ground between light and shadow just became a whole lot sharper and detailed with this stellar five-disc set, which compiles the entire second season of Rod Serling's classic television series, The Twilight Zone, and gilds the whole package by including a treasure trove of supplemental material. TZ's second season (1960-61) is a stand-out in the series' history thanks to its sheer number of memorable stories; among the episodes that have achieved pop culture landmark status are the chilling "Eye of the Beholder" (a disfigured woman undergoes surgery to appear more "normal") and "The Silence" (Franchot Tone wagers that Liam Sullivan cannot silent for a year); "The Invaders" (Agnes Moorhead is pitted against tiny space travelers), "Long Distance Call" (Lost in Space's Billy Mumy converses with a deceased relative on his toy phone), and the more light-hearted "Night of the Meek," in which department store Santa Claus Art Carney gets a chance to fulfill the real St. Nick's duties. As always, the combination of sharp, intelligent scripting (mostly by Serling, but with notable contributions by Charles Beaumont, Richard Matheson, and George Clayton Johnson) and superb casting (guest stars include Cliff Robertson, Dennis Weaver, Burgess Meredith, William Shatner, John Carradine, and Don Rickles) produces television that remains as thought-provoking and entertaining today as it was over 40 years ago.

Though The Twilight Zone has received numerous home video releases over the years, the aptly titled Definitive Edition is arguably the finest presentation of this series to date. Each of the episodes have been digitally remastered from original camera negatives (even the episodes filmed on videotape look good) and magnetic soundtracks; Serling's previews for upcoming episodes and advertising "billboards" (sponsor spots) have also been included, as have commentaries by Rickles, Weaver, Robertson, Shelly Berman, and other performers. Clips of Serling on The Jack Benny Show and in conversation with Mike Wallace, audio interviews with cast and crew members by Twilight Zone Companion author Marc Scott Zicree, radio adaptations of classic episodes, and even the script for "Twenty-Two," complete with Serling's notes, round out the set, which belongs in the collection of anyone who's ever been enthralled by this landmark series. Now, if only the same treatment could be afforded to Serling's other anthology program, Night Galleryâ¦ --Paul Gaita

Despite major changes in personnel and the ill-advised switch to a full-hour format, Twilight Zone (with "The" removed from its title) began its fourth season on a promising note. Written by series veteran Charles Beaumont, the premiere episode "In His Image" maintained the high standards that Rod Serling had established throughout the first three seasons, and the story--about a man (George Grizzard) who builds an exact robot replica of himself, with dire consequences--fit well into the hour-long format that Serling reluctantly went along with. Twilight Zone struggled with its expanded length, resulting in some episodes that lack the consistent punch of earlier half-hour episodes. Exhausted by three seasons of prodigious creativity, Serling and Buck Houghton vacated their roles as producers (with Serling's involvement limited to script feedback, writing nearly half of the season's episodes, and on-screen hosting), and TV veteran Herbert Hirschman became the new show-runner (departing mid-season, he was replaced by Bert Granet), promising not to tinker with the series' proven success. But Twilight Zone was inevitably becoming a shadow of its former self, and the involvement of proven TZ writers like Richard Matheson, Earl Hamner, Jr., and Beaumont could not entirely compensate for Serling's growing detachment.

Still, these 18 episodes include some fine examples of enduring quality, such as Matheson's "Death Ship," starring Jack Klugman and Ross Martin in a recurring nightmare scenario, and featuring the same spaceship model used in the 1956 sci-fi classic Forbidden Planet. Beaumont's "Miniature," starring Robert Duvall, was the only hour-long episode pulled from initial syndication (due to a plagiarism lawsuit that was ultimately dismissed), so its inclusion here (along with color scenes from its eventual syndication) is a welcome treat. Serling lampoons the medium of television with "The Bard" (with an early appearance by Burt Reynolds), and his teleplay for "On Thursday We Leave for Home" is the season's highlight, ranking among Twilight Zone's finest science-fiction episodes. It remained clear, however, that Twilight Zone was past its prime, and when the series was renewed for a fifth season in the spring of 1963, a return to its original half-hour format was a belated step in the right direction.

Of course, season 4's overall strengths and weaknesses won't matter to collectors of The Definitive Edition DVD sets, and a wealth of archival bonus features make this a must-have addition to anyone's TZ collection. Image Entertainment and features producer Paul Browstein deserve extra credit for their diligent assembly of supplements that render all previous TZ releases virtually obsolete. Nothing has been overlooked, from the commentary (on "Death Ship") and interview clips by acclaimed TZ expert Mark Scott Zicree to the inclusion of a vintage TZ spoof from Saturday Night Live, radio-show adaptations starring Blair Underwood, Jason Alexander, Lou Diamond Phillips and others, and a vintage Twilight Zone comic book, accessible on computers with Adobe reader installed. There's even a brief Rod Serling blooper taken from a scratchy 16-millimeter print, proving that no stone was left unturned in making this a truly definitive TZ collection. --Jeff Shannon