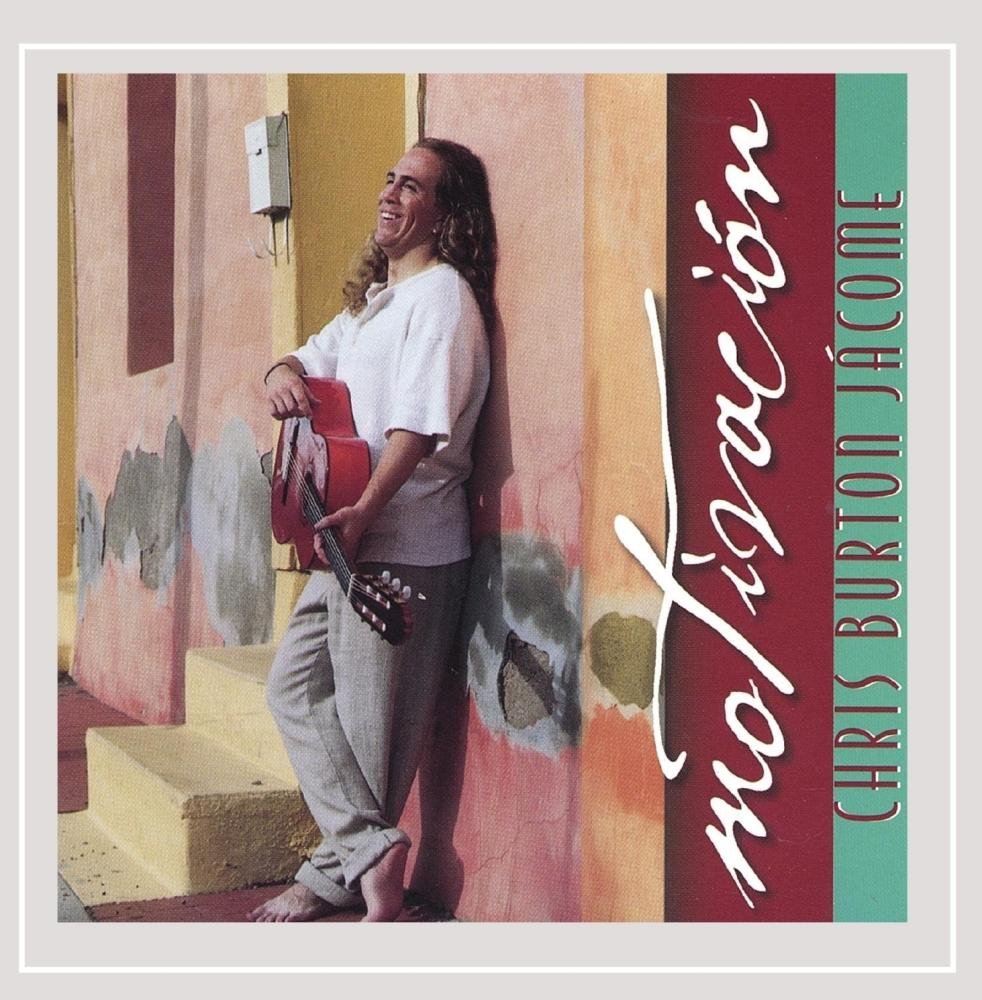 The music on this CD represents a kind of, "work in progress" composition method. I wrote most of this music over a 2 year period for two guitars because I was doing a lot of duo work at that time. The CD has many moods but I find that most of my fans tell me that it is a great CD to listen to in the morning. I have people come up to me all the time after shows telling me that I gave the perfect name to the CD, "Motivation". It gives me much joy to know that my music can lift the spirit and help start the day.

I hope you can find the same benefits and more.

Many adolescents find themselves attracted to the guitar and for most of them it proves to be a passing fancy. Not so for Chris Burton Jacome whose introduction to the guitar was quick to become his life's passion. His first guitar teacher and mentor, Albert Marques, introduced the young musician to the provocative rhythms of flamenco. Chris' passion for the music led him first to the completion of two Bachelor of Arts degrees from the University of Arizona, in Classical Guitar Performance and Spanish Literature. Chris then set out to immerse himself in this evocative form of music that stirred his soul. To expose himself to the best of flamenco, he left Tucson, Arizona in 1998 and moved to Sevilla, Spain to pursue his dream of becoming a flamenco guitarist.

After just three weeks of study in Sevilla, Chris' guitar instructor, Miguel Aragon, asked him to assume 2nd chair accompaniment to Juana Amaya, one of Spain's premiere flamenco dancers. This rare opportunity allowed Chris to accompany singers such as Enrique Robles, Segundo Falcon and Cristo "El Frances." In just a few months, Aragon's confidence in Chris was apparent when he was asked to accompany Juana alone. Chris also assumed 1st chair accompaniment position at Juan Triana's dance studio in Sevilla. Chris immersed himself in the world of flamenco through hours of practice, performance and observation and by adding flamenco dance, percussion and palmas classes to his course of study.

Upon his return from Spain, Chris accepted the position of first guitarist in Olivia Rojo's Flamenco Y Mas flamenco dance company. With Flamenco Y Mas, Chris played to many sold-out performances and performed with guitarist, Pedro Cortes and singer, Joaquin Escudero. His experience and reputation continued to grow and in 1999 Chris went on an east coast tour with Carlota Santana's Spanish Dance Company of New York. Later that same year, he released his debut flamenco CD entitled, Motivacion.

The reaction to Motivacion was outstanding as illustrated by these customer reviews; "Unbelievable talent," "A beautiful piece of guitar work from the heart," "A Must Have!" And from Scott Barker of Tucson Lifestyle Magazine, "Chris Burton Jacome joins the ranks of Flamenco guitar masters with his fiery and impassioned self-released album Motivacion." This debut CD, is made up of 10 songs all written and performed by Chris with a collection of guest musicians accompanying him on vocals and percussion. With poignant melodies and provocative rhythms, listeners find themselves carried away into a world of emotion and sound. "Motivacion" makes it's listeners acutely aware that Chris is, himself, captivated.

"p"Currently, Chris is the music director of 'Zona Flamenca in Scottsdale, Arizona and is preparing to release his second CD, PaÂlante. PaÂlante is a revolutionary work combining the integrity of flamenco with the pop hooks and production of today's contemporary pop artists. Chris Burton Jacome, composer, musician, producer, is the first to bring these two worlds together so seamlessly.

"I do my best. I do everything I can in this moment and then move forwardÂPaÂlante," Chris says, "I enjoy looking back occasionally to see my progress as a musician and as a person, but I always turn right back around and put my sights on the top of the next hillÂÂpaÂlante me digoÂPaÂlanteÂ (forward, I tell myselfÂkeep going forward)."

literary devices refers to the typical structures used by writers in their works to convey his or her messages in a simple manner to the readers.  When employed properly, the different literary devices help readers to appreciate, interpret and analyze a literary work. Below is a list of literary devices with detailed definition and examples.