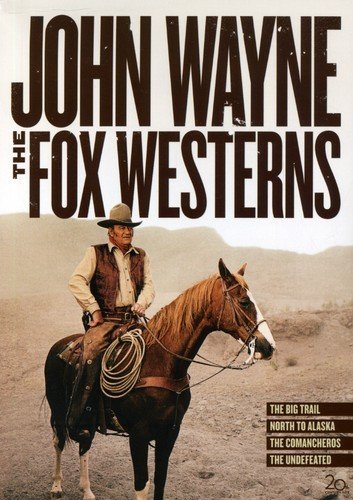 The Big Trail: One of very few widescreen productions filmed at the dawn of the talkies, The Big Trail (1930) was dismissed by reviewers of the day, little seen, and soon shelved and forgotten--for more than half a century, as it turned out. For movie buffs, it became a sort of Holy Grail. After all, the esteemed Raoul Walsh had directed, the early 70mm angle was tantalizing, and wasn't this the movie that was intended to make a star of Duke Morrison, a 22-year-old former prop man whom Walsh had rechristened John Wayne for the occasion? For curiosity value alone, surely it rated a look. Restored in the late 1980s and warmly embraced by film festival audiences, "em"The Big Trail proved to be more than just a historical footnote. What "em"were those 1930 reviewers thinking?! Wayne is fresh, exuberant, matinee-idol handsome, and irresistibly charming (only a little purple prose trips him up, and no one should have been asked to speak such early-talkie flapdoodle anyway). The scenario winds through epic settings from the banks of the Mississippi by way of the Grand Canyon to the snows of Oregon and the mountain vistas of Washington, marking both a wagon train's journey and the settling of a personal score between trail guide Wayne and Tyrone Power Sr. as a veritable ogre of a villain. The Big Trail is now an authentic classic, and a swell movie. Probably always was.

The Comancheros: Nobody made a fuss about The Comancheros when it came out in 1961, yet it has proved to be among the most enduringly entertaining of John Wayne's later Westerns. The Duke, just beginning to crease and thicken toward Rooster Cogburn proportions, plays a veteran Texas Ranger named Jake Cutter. When we first see him (in a tongue-in-cheek delayed entrance), he's catching up with a New Orleans dandy (Stuart Whitman) who killed a judge's son in a duel just after that gentlemanly practice was banned. Monsieur Paul Regret--or "Mon-sooor," as Jake insists on calling him--is not a bad fellow, let alone a badman, and it only follows that, after the requisite number of misunderstandings, he and Jake will join forces to subdue rampaging Indians and the evil white men behind their uprising. The Comancheros was the last credit for Michael Curtiz, who, ravaged by cancer, ceded much of the direction to Wayne (uncredited) and action specialist Cliff Lyons. With support from Wayne stalwarts James Edward Grant (coscreenplay) and William Clothier (camera), the first of many rousing Elmer Bernstein scores for a Wayne picture, and a big, flavorful cast including Lee Marvin (the once and future Liberty Valance), Nehemiah Persoff, Bruce Cabot, and Guinn "Big Boy" Williams (in his last movie), they made a broad, cheerfully bloodthirsty adventure movie for red-meat-eating audiences of all ages. Even the liberal-pinko Time magazine had to second the salute from leading lady Ina Balin at film's end: "Take care of yourself, Big Jake ... we've sort of gotten used to you."

North to Alaska: Even people habitually hostile to John Wayne movies tend to cast an indulgent eye on the rumbustious 1960 comedy-Western North to Alaska--partly because the Alaska gold rush setting seems more exotic than, say, Texas or Arizona, and because there are no Indians to discriminate against and no macho gunplay to fret about. As for John Wayne as all-purpose icon of male chauvinism, Big Sam McCord (the Duke) spends much of the movie in a state of growing discombobulation because he has fallen in love with, and is thoroughly flummoxed by, "Angel" (Capucine), the woman he's brought back from Seattle to marry his heartsick partner George (Stewart Granger). Henry Hathaway directs in a broader vein than usual, but he hits paydirt. Even Fabian, the latest pop music idol to be dragooned into supporting the elder roughnecks, is fun, and Ernie Kovacs is droll casting as chief "villain."

"p""em""strong"The Undefeated: John Wayne, that pillar of machismo, was well aware that costar Rock Hudson was gay, yet he prized him as a boon companion, a fellow professional, and one hell of a bridge player. Each plays a Civil War commander who, after the ceasefire, leads a community of home folks into Mexico to make a fresh start. Hudson is a Southern gentleman; Wayne commanded the Yankee cavalry at Shiloh, where Hudson's brother died. Nevertheless, Rock, with his extended family, and Duke, with his troop of cowboys and 3,000 horses to sell to Emperor Maximilian, soon join forces to outgun banditos and beam paternally over the budding romance between their respective daughter and son (an adopted Indian played by footballer Roman Gabriel with Crystal Gayle hair). Lingering North-South animosities are celebrated in an obligatory communal fistfight in the Andrew V. McLaglen manner, and the showdown with both Maximilian's lancers and the rebel Juaristas is disconcertingly perfunctory. --Richard T. Jameson